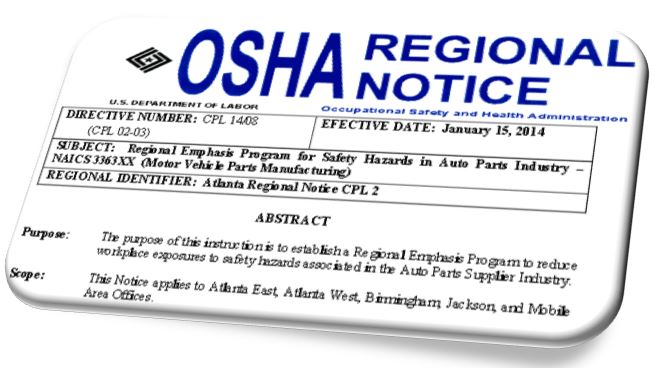 that supply engines, airbags, trim, or any other automotive products.  The specific geographic areas covered by… Shortly after OSHA issued the September 29, 2008 Interpretation Letter, the same insurance agent sent a second request to OSHA for further clarification, explaining that a sweep auger could not, by design, be completely guarded, and that the rope positioning system that OSHA suggested would be “extremely dangerous.”  This second letter specifically asked for OSHA’s interpretation as to whether an employee could be inside a grain bin with an energized sweep auger.  OSHA responded to this second request with another formal Interpretation Letter on Christmas Eve of 2009, with a direct “no.”  OSHA reasoned in the December 24, 2009 Interpretation Letter that if the methods proposed earlier by OSHA (i.e. guarding the operating side of the auger or putting a leash on employees) were ineffective, then the Agency was “not aware of any effective means or method that would protect a worker from the danger presented by an unguarded sweep auger operating inside a grain storage structure.”…
END_OF_DOCUMENT_TOKEN_TO_BE_REPLACED

We recently authored an article for Feed & Grain magazine entitled “When OSHA Comes Knockin’.” The article explains why employers in the grain industry need to be prepared for an OSHA inspection,

and outlines steps they should take to prepare for and…